You are a living Temple of unlimited radiant lifeforce. Within your vessel lies the ‘kingdom of heaven’, the keys held sacred in the altar of your heart.

Through yogic practice and coherence with the planetary spectrum, we remove the obstacles to the flow of light within, aligning with boundlessness to co-create at will. Initiate your week with intention, attunement, and devotion to the cosmic wheel of time.

“My body is my temple and my asanas are my prayers.” “AS ABOVE, SO BELOW”, this one of the guiding principles or metaphysics, spiritual development and the Kálachakratantra teachings. The Kalachakra is the Dali Lamas most sought after teachings. We have incorporated these philosophies into a form of yoga practice both for the mind and for the body.

THE POSES: The general poses of Kalachakra YogaTM are in comparable to the school of Hath Yoga, with a focus on the meanings and energy behind the poses.

MINDFULNESS PRACTICE: Centering of the mind, as both at the middle of everything and the center of nothing.

ADDITIONAL PRACTICES: There is a focus on ‘subtle energy’ and ways to enhance and balance those forces without and within.

A key element of the Kālacakratantra is the correspondence between macrocosmic processes and microcosmic processes. The Kālacakratantra maps the various features and developmental processes of the world system to various features of the human body.[20] The phrase “as it is outside, so it is within the body” (yatha bahye tatha dehe) is often found in the Kālacakratantra to emphasize the similarities and correspondence between human beings (inner Kālacakra) and the cosmos (outer Kālacakra), as well as with the enlightened Kālacakra mandala of deities (alternative Kālacakra). This correspondence comes about because both the cosmos and the bodies of sentient beings come into existence due to the efficacy of the habitual propensities of the minds of beings. In this sense, the cosmos is like a cosmic replica of a sentient being’s body. Thus, one can say that the cosmos and the individual are nondual and mutually pervasive, even in terms of their conventional existence. They are interconnected and they influence each other.

The 7 primary planets are represented by the colors in the glyph of the Kalachakra.

Kālachakratantra could be considered the union, the joining energy of the higher and lower realms. 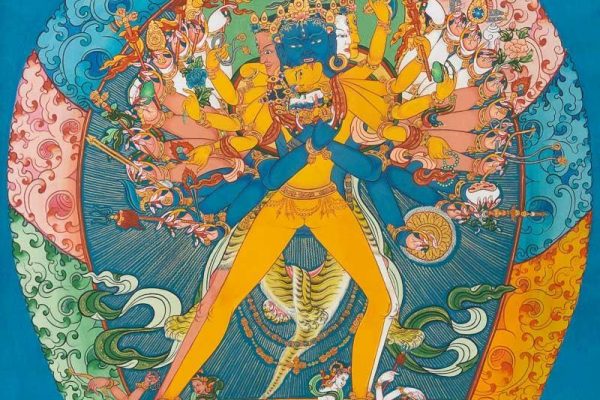 “Shri Kalachakra shining forth with stainless light rays of five [colours], with a body blue in colour. Having three necks the central is blue, right red and left white. The main face is black and fierce with bared teeth. The right face is red and desirous. The back face is yellow and in samadhi. The left face is white and very peaceful. Each face has three eyes.

The hair is tied in a tuft [along with] a vishvavajra, crescent moon, and Vajrasattva as a crown, a vajra jewel, vajra earrings, vajra necklace, vajra bracelets, vajra belt, vajra anklets, vajra scarf, vajra mala, and a loose tiger skin skirt.

The first [two] shoulders on the right and left are blue, second red, third white, for a [total] of six [pairs] of shoulders, twelve upper arms and twenty-four hands. The first four [right and left] are black, second four red, third four white. The thumbs of all the hands are yellow, index finger white, middle finger red, ring finger black, and little finger green. The first knuckle is black, second red, third white. All of the fingers are beautiful and radiant.

Above a Moon, Sun and Rahu, standing in a very playful manner, the right red leg is extended atop red Kamadeva having one face and four hands, holding five flower arrows, a bow, lasso and a hook. Under the left white leg is Rudra, white with one face, three eyes and four arms, holding a trident, damaru drum, skullcup and a katvanga. The demon [consorts] Rati and Uma in a woeful [manner] hold the soles [of Kalachakra’s feet].

Vishvamata, yellow in colour, embraces [Kalachakra] from the front. The faces, from the right are yellow, white, blue and red, each with three eyes. There are eight arms. The [first] right hands hold a curved knife, hook, a rattling damaru and bead mala. The left [hands hold] a skullcup, lasso, white lotus with eight petals and a jewel. Vajrasattva [appears] as a crown. Adorned with the five mudras. The left leg is extended – standing together with the Bhagavan.”

Register for class
Scroll to Top